Cos has been named International Hairdresser of the Year today in a presentation live streamed on Instagram. 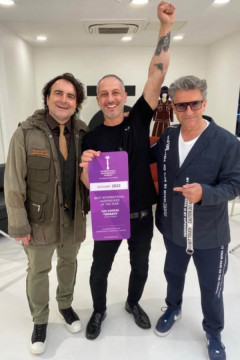 Founder of the International Hairdressing Awards, Mikel Luzea and Global Ambassador, Sergi Bancells, surprised Cos at the TONI&GUY Academy in central London.

This is the second time Cos has been nominated for the award, which saw him put together a selection of beautiful images from his Craftwork collection, as well as his achievements and work over the past 12 months.

Cos was the first winner to be announced as part of the International Hairdressing Awards World Tour, which is stopping off at every winner’s city announcing the seven category winners this week.

Cos said: “I was really shocked when Mikel and Sergi arrived at the Academy this morning - and was delighted when they announced I was the winner of International Hairdresser of the Year! It’s been a difficult 13 months and this award is dedicated to the whole TONI&GUY team across the world who have worked tirelessly to educate and inspire hairdressers everywhere.”